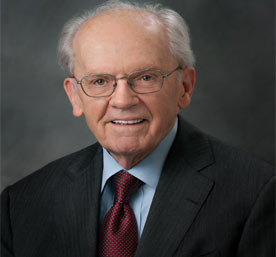 We have the experience to assist you when you have a business problem such as organization, acquisitions and disputes.

About one week before I graduated from law school in June 1953, I received a notice from my draft board that I was being drafted into the U.S. Army shortly after law school graduation. Since I would not be around when my class would go to Springfield to be sworn in as attorneys, the chief justice of the Illinois Supreme Court accommodated me and I took the oath from the Chief Justice in his private office in Chicago.

As a law recruit in the army I made the grand sum of $22 per month. When my law school class was sworn in a little later, I was sleeping in a tent on maneuvers at Fort Reilly, Kansas. When I finished my service two years later, I was making $122 per month as a corporal. I then entered a small firm and handled a variety of legal work. One bit of advice I always remember from one of the partners as a rule was “Always think of the equities.”

After about two years at the firm I joined the Illinois Securities Department and handled local and national “blue sky” securities offerings. That experience changed my focus regarding the practice of law and was of enormous benefit to me professionally. After about two years at the Securities Department, Samuel H. Young, the Assistant Secretary of State and the author of the Illinois Securities Law asked me to leave the securities department and join him at a law firm in Chicago. The firm was called Hough & Coale. Charles F. Hough, the lead partner, was a lawyer who incorporated American Hospital Supply Corporation (“AHSC”) in 1922. As an associate, and later as a partner at Hough, Young & Coale, I had the benefit of working on important matters. With others I worked on the initial securities offering of AHSC and the listing of its stock on the New York Stock Exchange. I had the good fortune to work with Foster G. McGaw, the Founder of AHSC.

When I joined the Firm in 1959, AHSC was the largest distributor of hospital supplies in the United States. Foster G. McGaw owned almost all of the stock and was the President. The Firm then known as Hough, Young & Coale was stretched to the limit with legal business and a merger with a larger firm was necessary. After the merger, the larger firm was Spray, Price, Hough and Cushman. After some years the firm expanded with offices in five states and about 350 lawyers.

Since 1992, the attorneys of the Clinton Law Firm have faithfully served businesses and individuals throughout Illinois. Their wealth of experience and reputation for excellence make them a valuable asset to any business, entrepreneur or investor in the Chicago area. To schedule a consultation and discuss your case with a knowledgeable Chicago business law attorney, call us at 312.357.1515 or contact us online today.

Some of the more memorable cases and events are as follows:

AHSC becoming a public company. I assisted in the legal work to make AHSC a public company, including obtaining a listing on the New York Stock Exchange, for its common stock. Charles Hough bought the first 100 shares traded. Some years later that stock was worth millions.

The Probate Fee Schedule. A rich lady went to the guard, at the office building of Hough, Young & Coale, and asked the guard to recommend a lawyer to draft a will. He referred her to Charles Hough who prepared a will according to her wishes. Following her death a few years later, we probated her estate. At the time, probate fees in Cook County, Illinois had to be approved by the probate judge and could not exceed a fee schedule based on asset size. The lady inherited from her husband approximately 20 New York Stock Exchange Companies that had greatly appreciated in value over the decades. Based on the asset value I submitted the petition to the probate court and it was approved based on the fee schedule. As a curiosity, I compared our time to the fee schedule and was surprised to find that we were being paid in 1967 over $1,500 per hour. After 46 years, few lawyers are making that much per hour now.

A Point Or Two. AHSC distributed cannula needles for injections on a large scale throughout the United States. Some needles broke at the point of entry into the person’s body which caused great inconvenience to doctors and nurses to pull the broken part of the needle out. Needles were then redesigned and were used but the needle at this time at the point of entry was larger and numerous complaints throughout the United States about the pain when the needle was injected. AHSC sought out a company that could make a needle that would not break on entry to the body and would not be so thick that it would cause people pain when injected. The owners of small companies were frequently ready to sell and receive stock of AHSC which could be sold on the open market. Such a company was found.

The owners of the target company wanted to sell the company for cash and stock. I drafted the acquisition agreement for the main owner in the office of AHSC. The President of AHSC at that time personally sat through the drafting process. He was there to show the owner that he was interested although he did not offer or reject any of numerous issues that came during the course of the session.

I, then, with an AHSC employee, knowledgeable about the manufacture of needles joined me on a trip to Oklahoma to view the manufacturing process. When we entered the facility, I was shocked. I saw a long conveyor type apparatus and two employees. My immediate reaction was “this can’t be the answer.” However, the AHSC employee knew the technicalities and understood that this process could be used, and, in fact, the process could be expanded.

One of the problems was that this acquisition target had hundreds of substantial unpaid bills of suppliers throughout the southwest.

I could perceive problems if some of the suppliers were not paid. For all practical purposes, the suppliers were no longer furnishing any products to the target. I was determined that before there could be a closing I had to be satisfied that on behalf of my client that there were no bills unpaid that could come to haunt us later. I decided that the only way to do that was to have a bank handle the closing and furnish a number of bank employees that could verify the amount of each indebtedness and then see that the bills were paid shortly after the closing. I went to a large bank and hoped that the bank might be able to furnish employees who could assist in attempting to verify the outstanding indebtedness. I expected that even if I found a bank to participate, it would want indemnification, etc. To my great surprise I asked for the head of the trust department, a very obliging trust officer said “we can accommodate and we will verify the numbers” He did not ask for indemnification. At the closing the President of the target, who I now knew quite well, appeared on behalf of the target and no other stockholder or officer joined him. At one point during the closing, I asked if a certain document had been signed. The president responded with a question “Ed, don’t you think things are on the up and up?” I said that I had no doubt but I was very puzzled as to why that question was raised.

The closing went smoothly and the numbers were accurate.

The following week I received a call from the attorney for the seller. He inquired about a few minor details and then related the startling fact that the president of the target had, the night before the closing, been fired as president by the other five stockholders. The former president only owned 45% of the seller. There were numerous document signed at the closing by the former President that were false. Some were under oath. The attorney said they decided not to tell me because of his concern that I might hold up the closing. All unpaid bills were paid.

I told my client about the incident but the client showed no interest. The acquisition was highly successful. The former owner then left to raise horses in Oklahoma which he always wanted to do.

You Only Need One Leg. We were scheduled to close an acquisition three days before Christmas. We were buying a company based in San Francisco. I fell on my way to a suburban train and broke my ankle. Of course, I did not know it was broken, but I did know that it was swollen so I proceeded to the closing at the Harris Bank in Chicago. While hobbling around a table in the conference room, a representative of my client noticed my limping and said “you have a broken ankle.” Within a few minutes a messenger arrived with a pair of crutches. I don’t know who the client called or how he managed to get crutches delivered so quickly but they were very useful. The acquisition closed smoothly.

The Investment Company Act. We represented a company that had various oil and gas interests in the southern states. A successful company and to the surprise of the clients they received a letter from the SEC that stated in substance that the company appeared to be subject to the Investment Company Act of 1940. This was a serious charge by the Securities & Exchange Commission. If the SEC ruled that my client was an investment company, then numerous changes would have to be made in the structure. The Investment Company Act Of 1940, among other things, requires certain independent directors which the client did not have and did not want. I was chosen to respond in writing to the SEC. For a period of five days (Monday-Friday), I spent in a room with the operating manager of the company. He had large maps in which he explained in detail how the company explored for oil and gas. He acted as a teacher with one student. I was then in a position to respond to the SEC and the SEC dropped its inquiry after my presentation. Everyone was relieved that it did not have to comply with The Investment Company Act.

Business of the type described gave our Firm’s business attorneys the ability to furnish business advice.

Identical Names. A client, a larger New York Stock Exchange Company, discovered another company using its identical name in the same business. The company was in the city. With a representative of our client we visited the small company. To our surprise, the owner of the small company said he never heard of our client but agreed to change the name of his company. A short car ride and the potential business issue was solved.